It is Really Hard to Win a Championship at Any Level 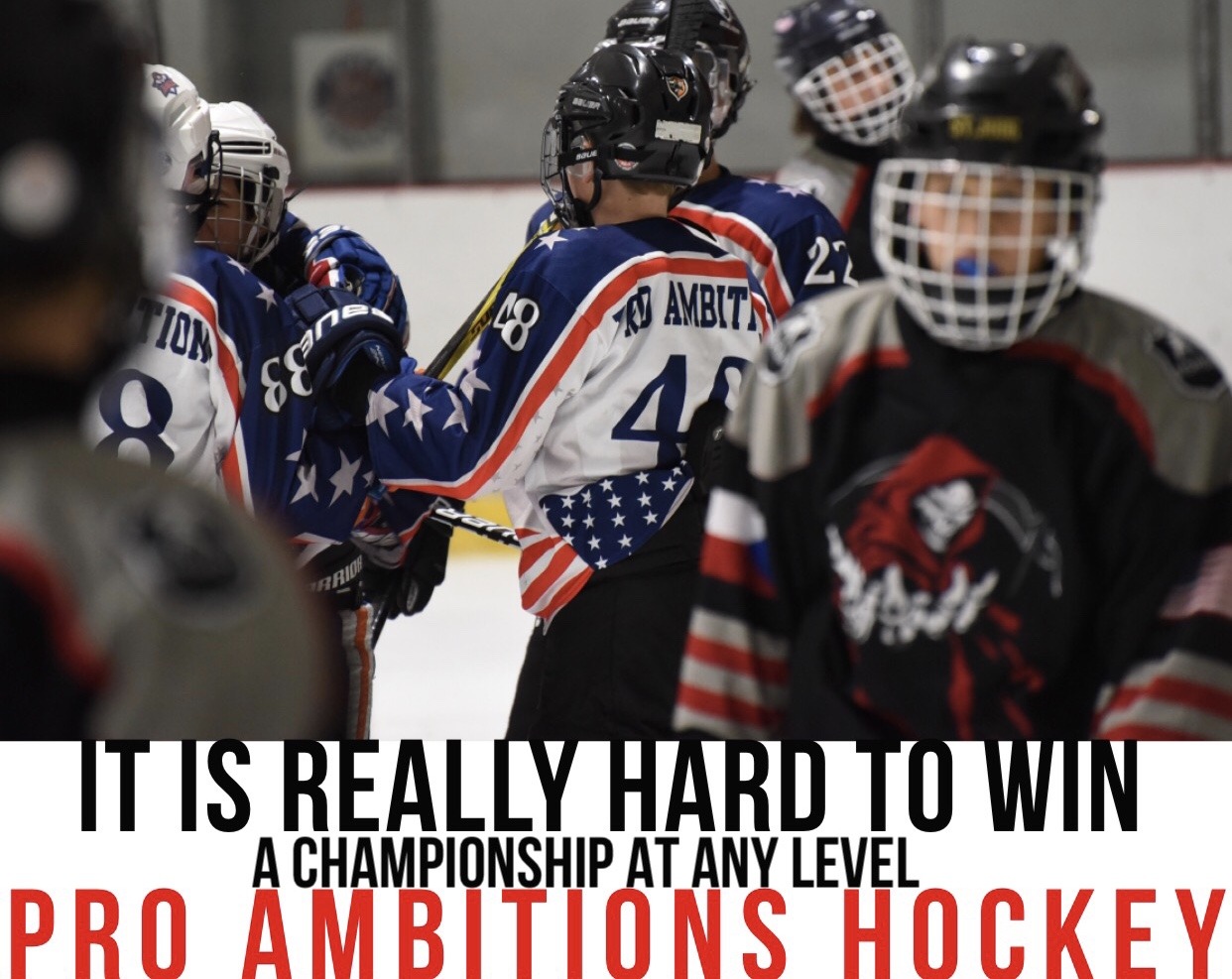 It is so damn hard to win a championship. Any sport, any level.  From mites to the NHL.  Some of the most highly skilled and decorated professional athletes may go a lifetime and never win a championship including going back to their youth sports days. Championship teams face adversity, all teams and players do whether you think so or not. It is not just you facing a roadblock in sports. The difference is champions don’t go in the tank at the face of adversity. They battle through injuries illness politics on the team unforeseen circumstances and stick by one another supporting each other unselfishly. The secret recipe to winning a championship is whole hearted commitment from every player mixed with skill, determination, grit, tenacity, work ethic, unselfishness, and execution of planned success. Championship teams have a ton of heart and take care of one another, all in no matter what. All gas no breaks. There is a little bit of luck sprinkled in too, good bounces happen here and there throughout the long season, no question. Star players need to step up, they set the tone for the team. If your key players are off typically the whole team is off. That being said, what I call the NON STARS of the team and the bench are equally as important as the stars on the team.  If one of the stars is off due to injury or illness, somebody else has to step up and be the star. I have written an article called the NON STARS on the team that has been published in many national hockey magazines that is available on our website to read. It talks about the importance of what I call ” The NON STARS” on every team.

Quotes of players from Championship Teams:
“We have had every bit of adversity you could possibly imagine this season but it did not phase any of us.”
“All gas no breaks. Not even a tap on the breaks.”
“My teammates would walk through fire for me and vise versa.”
“Champions are made from something they have deep inside of them-a desire, a dream, a vison. I hated every minute of training, but I said, ‘Don’t quit. Suffer now and live the rest of your life as a champion. Leaders are made, they are not born.”
“The harder the battle, the sweeter the victory.” Victory is sweetest where the battle is greatest, and that is how life is.”


If you lost in that final championship game…it will sting. Forever. I am still not over a loss from over twenty years ago. I was playing for the Toronto Maple Leafs AHL Team. Our home was St. John’s Newfoundland. Our rink that year was under construction. We were on the road all season, living in hotels, traveling on a bus that went on ferries around the cold islands of Nova Scotia. We were tired, hurt, banged up really bad. We were so bonded and close though. Brothers. We lost in the final seconds. So much was on the line, pretty much all of the guys from the winning team went to the NHL the following year. I was playing with a broken rib, torn labrum, other guys too.  I think about that game almost every day. I think that game gave me the strength at that final Penguins camp to make that team no matter what though…

All that being said. Here is advice for the next season. Regroup and learn from the past. Think of things beyond winning. Think of how you want your team to be remembered. The team that made it so far on heart and grit. Planned success is actually much sweeter than unplanned and surprising success. Execute your plan to perfection for next season. Start planning now. I must as always reference The New England Patriots. The epitome of planned success and execution of their plan as a team. Teams must reflect on their standards and raise the bar even higher for the next season, especially after winning a championship title or coming so close. Other teams will be gunning for you now. Think about that final game. Could we have made bolder choices. If it aint broke don’t fix it but if things are not working, lay it all on the line and make a bold move next time. Lay it all on the line.

I don’t care what pool you are in…Class A B C, Division One Two or Three. National Teams. Olympic Teams. High School Teams. Prep School Teams. Mite House Teams. Squirt Select Teams. Tier One Two or Three Club Teams. College Teams of all divisions. Minor league teams and NHL teams. It is so hard to win a championship. Congratulations to those who won the ultimate battle.

We are the Battle Camp, our signature curriculum for every player for every age and level. Start early with us so we do not have to undo bad habits. All skill development in the morning session applied to game situational battles in the afternoon. We are the official development camp of The Boston Bruins, Hockey East and now  The NWHL. We have specialty girls camps in every NWHL city next year and specialty camps and clinics here in Boston. We form single player teams for all of our European Tournament Teams in Prague, Bordeaux France and Sweden/Finland Scandinavia Tournament. We are offering a specialty training camp in Pilsen Czech Republic with Martin Straka, my former teammate from The Pittsburgh Penguins who now owns a hockey club in Czech. This specialty European development camp is offered  before and after our Prague Tournament for players competing for us in the tournament or not. The Europe packages require at least one parent to travel with their player and are almost completely all inclusive. Inquire to play for us in Europe April School Vacation in Sweden and Finland, a long weekend in May in Boardeaux France or in Prague or Sweden/Finland in August. Email Jeff Serowik at js@proambitions.com Birth years 2005-2012 Some teams are AAA and some AA. We will find the right team to place you on.

Visit us to explore youth hockey development for boys and girls ages 5-17.
WWW.PROAMBITIONS.COM