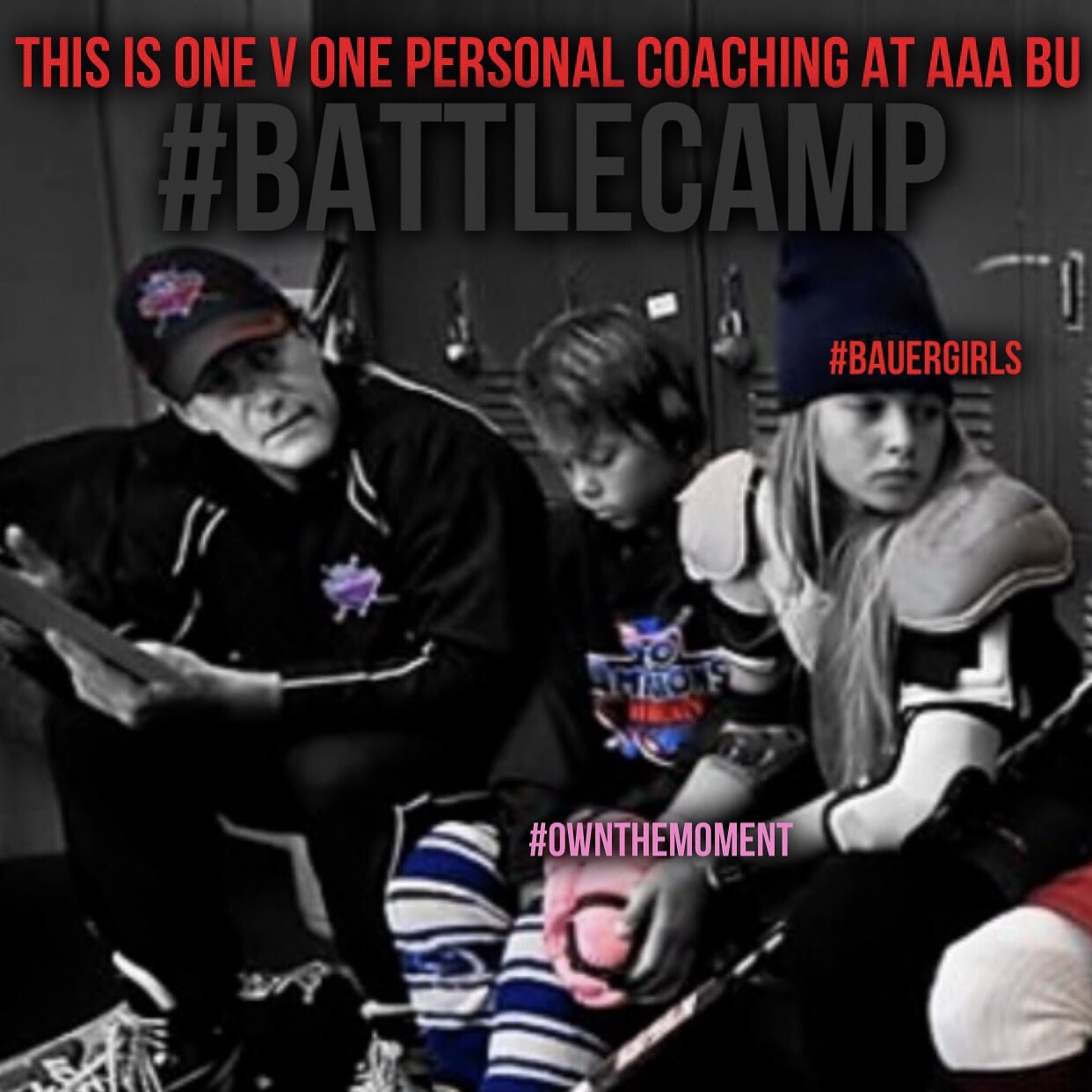 A self-fulfilling prophecy is a prediction that directly or indirectly causes itself to become true, by the very terms of the prophecy itself, due to positive feedback between belief and behavior. It took me many years to really believe in self fulfilling prophecies and myself. I am speaking as an athlete and a man. I think every hockey player out there knows the feeling of fear. Fear of making a mistake. Fear of not making a team. Fear of losing. Fear of getting sent down. Fear of getting benched.  Fear of letting down your teammates, coaches or parents. If there is one piece of advice I can give to youth players, it is to strengthen your mental game along with your skills. Every player is going to come up against opponents who are bigger, stronger, skate faster and have a harder shot. You need to cultivate your mind game. Even if you don’t have a physical advantage over an opponent, you can have a mental advantage. That can translate into superstar skills and instincts on the ice. Wayne Gretzky has always talked about the skill work he practiced on his athletic mind. He said, “ In a hockey game my eyes and my mind did the majority of the work for me, not my body. Over time I learned to get a feeling where my teammate was going to be. Where I needed to be, what I needed to do, what I wanted to achieve.” Accept yourself warts and all, no matter how humiliating or bad the situation may be. When you do a funny thing happens. Your skills, or opponents don’t seem like such a big deal. You will feel more empowered to solve these challenges. Fear is good. Face it head on and believe in yourself. Visualize what you want to happen. Don’t’ think about what you fear will happen. Hockey is a game of mistakes. Move on after a bad shift and visualize what you want to happen in your next shift. Take deep breaths while you are sitting on the bench. Get your head back in the game.

The season I won the Eddie Shore Award, awarded to the Best Defenseman in the American Hockey Leauge, is the season I began consulting with a sports psychologist. The decision and commitment to train my mental game was a pivotal point in my career. That season I was playing for the Providence Bruins, I was so close to my dream of not only playing in the NHL but playing for my hometown team and with the players I admire the most. Namely Captain Ray Bourque. I like to address him as the Captain because he epitomizes the word in every sense. An unselfish leader. Fred Neff and Max Offenberger are two sports psychologists who coached me. They are still my friends and continue to mentally train NHL players, NHL prospects and youth athletes. They are formidable coaches at my Boston University boarding camp locations and help my campers on strengthening their own mental game. I will never forget what I learned from my first encounter with a sports psychologist that season. He asked me simply, what I wanted. What is my dream? I thought it was obvious. I wanted to play for the Boston Bruins. They made me say it aloud. I think it was the first time I said it aloud. I was taught to also say it to myself, in my head, over and over again during my games. I was taught to repeat it especially during a game after making a mistake or after a bad game where I could feel my confidence going into the tank. It was then that I started believing in myself and realizing I had to believe in myself to attain my dreams. That season in Providence, I broke the all time record of scoring by a defenseman. I was solid in my end. When there was an injury in Boston I was the call up to the Bruins. Dreams do come true. I will never forget playing with Captain Ray Bourque as my D partner in the Boston Garden. This is not to say everything went perfectly in my career after that season because it most certainly did not. I continued to have highs and lows and setbacks as everyone will and does. But from that point on I realized that my mental game was equally as important as my physical game. I had to believe in myself. Game on. This is why mentally coaching the youth of The Nation is an important facet of Pro Ambitions.

Over the years, I have had the privilege of becoming close friends to hundreds of hockey players.  My teammates, coaches, players, campers and camper’s parents. We talk about hockey not always going to go as planned. This is true for every player at one point or another along their hockey journey. Even NHL All Stars. But remember this kids…The kids who stick with it and believe in themselves are the kids who will attain their dreams both on and off the ice. It will happen eventually if you keep on working hard and commit to not giving up. A little story about one of my favorite campers…He wanted to play for  Notre Dame someday. He was a mite when he told me this. This kid had so much heart, integrity, work ethic and skill but lacked in size and stature on the ice. I call him and undersized but overhearted player.  He continued to lack that size and stature all the way through his hockey career. He did actually get a full scholarship to Notre Dame. Even though he was a Boston kid, he boarded at Shattuck St. Mary’s in the midwest closer to Notre Dame. He along with his awesome hockey parents were on a journey to help him attain his Notre Dame dream. Although he did get recruited and make the team at Notre Dame…right out of the gate he was getting very little ice time. As two seasons unfolded he got less and less ice time. I will never forget talking to him on the phone and hearing the voice of a broken spirited hockey player. I knew that voice all too well, sounded like my own many times. At the time of that phone call I too was at a crossroad in my own hockey dream. I had just suffered my career ending concussion with The Penguins.  I could no longer play professional hockey.  My hockey dream changed. I now began to dream about passing on my hockey knowledge to youth players and staying in the game I loved. Maybe I could help youth players attain their dreams? I was tired of feeling sorry for myself because a concussion forced me out of the game at the pinnacle of my career.  Our talk not only helped him but it helped me. I encouraged him to not give up on his dream which we determined together had to change. His dream wasn’t necessarily playing for Notre Dame anymore, but now was to play Division One College Hockey…maybe somewhere else. He needed to believe in himself to embark on the next part of his hockey dream journey. The path he chose was not easy. He transferred to my alma mater. Hockey East. Providence College. He started over as junior. He had to red shirt and sit out for an entire season. He did not give up. His second and senior season at PC he was named the Providence College Hockey Captain. One of the most impactful Friars of all time both on and off the ice. His personal and professional successes since graduation have been formidable. He believed in himself. So did I. He is now one of the Athletic Directors at PC. As for me,  I have found more fulfillment coaching and teaching youth players than I did as a player. Who knew? Dream Big. Embrace the evolution of your dreams. Maybe you thought you wanted to play Division One College Hockey, and maybe you will be the impact player at a Division Three School with better academics? Maybe you want to make the A team but will enjoy a year being the impact player on the B team this season and have a summer hockey growth spurt over the summer and crush try outs the following year?  Maybe you want to be the franchise player in the NHL. Maybe you want to get a college scholarship?  Maybe you want to make your high school team?  Maybe you want to play for a highly competitive prep school team?  Maybe you want to be drafted? Maybe you want to go to an Ivy League School? Maybe…

Life is a Battle Camp.

Kids and parents please follow us on Instagram. We have a lot of exciting things planned for our insta because that is the social media platform kids love best:) 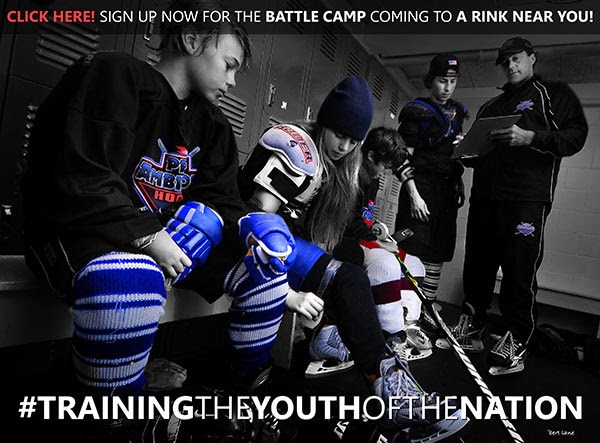